After trying a seafood club at a local restaurant that rendered Seth speechless, we decided we needed to make a similar version at home! The restaurant's version had shrimp salad, a crab cake, bacon and lettuce.
Now, I'm not a fan of shrimp salad (or chicken salad or potato salad or macaroni salad), so we switched that out for the traditional turkey.
My mother-in-law's birthday was last weekend, and after having crabs for dinner, we had A LOT of crab meat left over for the crab cakes :) Yum!
We're both huge fans of bacon too, so that stayed. I mean, who is not a fan of bacon??
Also, now that I'm a grown up lady, I will actually eat lettuce on my sandwiches!

The result was delectable! 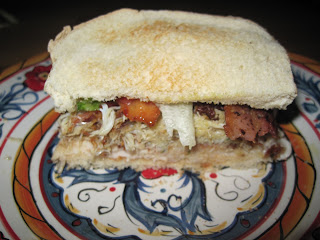 Sorry for the poor picture quality! I was too anxious to eat it :)

In other news, Seth and I harvested our potato crop last night from our garden. We were rather impressed with the potatoes we got this year :) Plus, I felt like such a farmer, even though Seth did most of the work and I just moved the pot around and picked up the potatoes that he missed! We also picked our first cucumber, and it got to be a very yummy addition to a salad at dinner last night :) 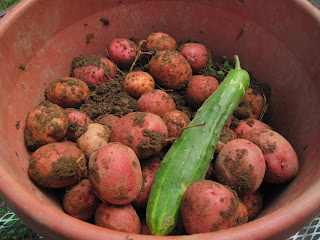 Posted by Seth&Courtney at 7:37 AM

Seth&Courtney
Married and cooking together since 6/19/10